The Campaign's Climax ~"Towards the High Peaks!"

Well, the dust has settled over the field of battle, the dead have been buried, the wounded treated and reports written and forwarded to a higher authority. As usual I've included a few pictures intended to give a flavour of how things developed over eleven turns. We used Rapid Fire2 for a change with a couple of modifications to artillery fire which proved effective. Now, off we go to Rhanzlistan ~

Rapid Fire !2 seemed to us to work quite well for the battle and produced a believable result we felt. Perhaps we might have prolonged the game beyond eleven turns if we had split the RFF into three sub sections for Morale purposes. I survived four turns of consecutive Morale checks before succumbing and Phil survived two. Once you have minus 4 to begin with the writing is on the wall, or in my case the High Peaks!
Well, that's that for Rhanzlistan for another year. We shall have to wait a while now to see what 2020 will bring for the characters who populate our imaginations and our tabletop. Perhaps Brigadier Bykleigh will be posted to the China frontier, we shall have to see...

With their backs to the high peaks

For the latest instalment in our series of loosely related games set near the NW Frontier in our fictitious province of Rhanzlistan, a Province permanently located in the early 1920’s, I devised a scenario where the Rhanzlistan Field Force would take the offensive to drive the Soviet Peoples International Field Force once and for all from the Jewel in the Crown’s possession. However, thanks to agents working amongst the Bhurpas, whose loyalty to the Crown is somewhat elastic shall we say, General Robinski has got wind of the attack and has been busy preparing his defence...

Pop back towards the end of the week for the AAR.
Posted by David at 08:07 6 comments:

On Tuesday next week Phil and I have scheduled a return to action in Rhanzlistan. The scenario sees the much vaunted SPIFF with their backs to the high peaks under attack by the RFF. Due to the usual treacherous behaviour of the Bhurpas General Robinski has got wind of the impending assault and has ordered his men to dig in, buying time to evacuate his I'll gotten gains over the mountains and away. To whet your appetite for the action I've taken a few pictures of the initial deployment of the RFF ~

If you are interested, pop back later next week to see how the action unfolded.
Posted by David at 02:24 4 comments:

Death in the Red Fort...

Apologies for leaving Rhanzlistan on the back burner for so long, life and other hobby interests just passed it by I’m afraid. I hope this account of Monday’s spiffing game with Phil here in GHQ will prove some consolation to my loyal reader! The game was played using Bolt Action Second Edition rules.

The scenario I devised was a three handed game for two players. The R.F.F. - the God Guys you recall - had a force of 7 units to pick from their complement, the S.P.I.F.F. - the Bad Guys of course - a force of  8 units from theirs, while there were 6 units of Bhurpa warriors. All three forces had the same objective, namely to seize military supplies left behind in the ruins of an old village and fort. The Bhurpas were activated by their own dice and controlled by whichever of the other two sides had drawn the previous dice for their force.  If the Bhurpa dice was drawn out first in any turn it was disguarded. Thus either side could utilise the Bhurpas in their own support, to thwart the enemy's ambitions, or just seize the supplies for the Bhurpas themselves if that was the best choice to hobble the enemy. In addition to these dice, their was a red 'End of Turn' dice, whose title describes its function in the game of course. The game length was set at 12 Turns before nightfall was declared and the game concluded. Now, as ever, as series of pictures and captions to capture the essence of the struggle for any interested passersby ~


The mechanism for random control of the bands of Bhurpa warriors worked really well we both thought. In the early moves, the draw of the dice favoured the cause of the R.F.F., while in the latter stages the control of the warriors entirely passed to the cause of the S.P.I.F.F.! This enabled them to utilise the fire of the bands of warriors to destroy the Tandooris holding the fort's ruins and concentrate their own efforts on holding back the advance of the R.F.F. If the game had beyond the agreed 12 Turns it is probable that the Soviets wold have emerged victorious, but the fall of night comes quickly in Rhazlistan and thwarted their efforts at the last, allowing the R.F.F. to slip away with half of the contested supplies.
I do hope it will not be so long this time before we return to Rhanzlistan and the ongoing tales of daring do which take place amongst its mountains, valleys and villages...

A little project for my convalescence ~

As you may know from my main blog I’m scheduled to have a hip replacement operation next month. I doubt I will be able, or wanting really, to sit at my painting desk for several weeks. I shall however be able to sit at the dinning table and so I’ve been looking about for small projects which might suit the location and can be tackled in short time slots. Terrain seems the obvious answer, but what exactly?
Well, on a visit with Sue to the local Garden Centre’s aquatic supplies area I found this model of an Indian/Arabian building ~ 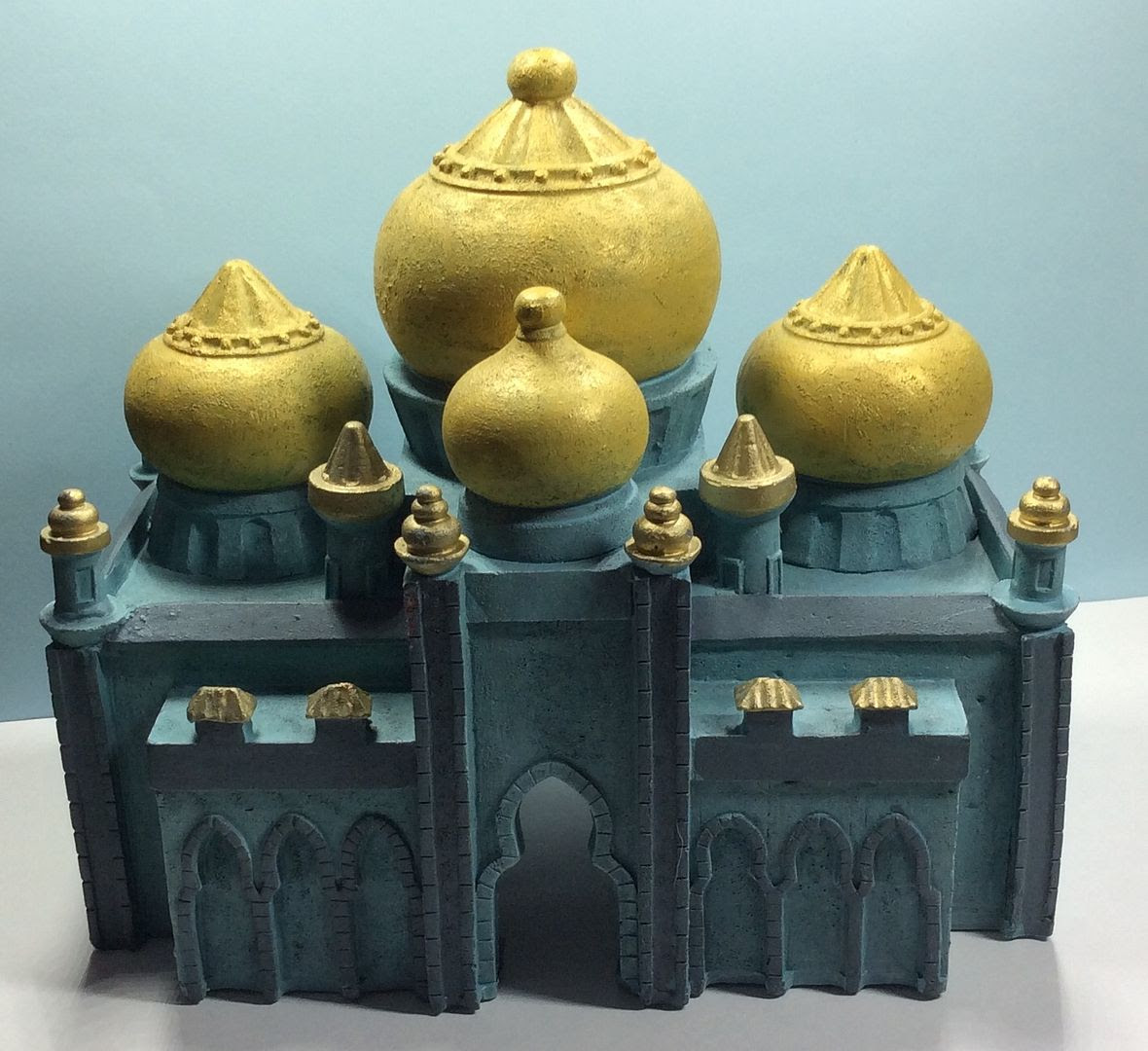 Now at close examination it’s obviously not 28mm scale, but I think it will pass muster as a palace or mosque on the table with some work. We shall see. It would also make a nice Gurdwara for Sikh Wars games I think, not that I’m planning any you understand. Price? £5.99, a snippet really. I’ll keep you posted as and when it’s finished.
Posted by David at 00:48 4 comments:

After what was really too long an hiatus, Phil and I dusted off our forces for a return to our Rhanzlistan campaign. The forces of the S.P.I.F.F. lead by the dastardly General Robinski sought to force a passage of the river Rhan and raid deep into territory vital to the governance of the Province and the maintenance of supplies to the Field Force ~


As usual we used Bolt Action 2 for the rules, setting the game's duration at 6 Turns, plus a 7th on a throw of 4-6 at the end of Turn 6. Phil's initial caution left him short of the objective while my force was still in place, though severely mauled! I conceded a tactical win to Phil, so when we return to Rhanzlistan it will see the S.P.I.F.F. attempting to carry off their plundered supplies before their escape route is cut of...
Posted by David at 11:35 8 comments:

Email ThisBlogThis!Share to TwitterShare to FacebookShare to Pinterest
Labels: Games

I've spent the day off and on progressing the Supreme Littleness Designs MDF Fort kit. Having coated it in Basetex 'Dried Earth' and gritted the base with my usual basing mixture yesterday I left it all to harden overnight. The first stage is to paint the entire structure, I use Crafter's Acrylic Burgundy Rose as the base colour on all my sub continent buildings, and to was the base to match the figures, again using Crafter's Acrylic 'Country Maple' ~ 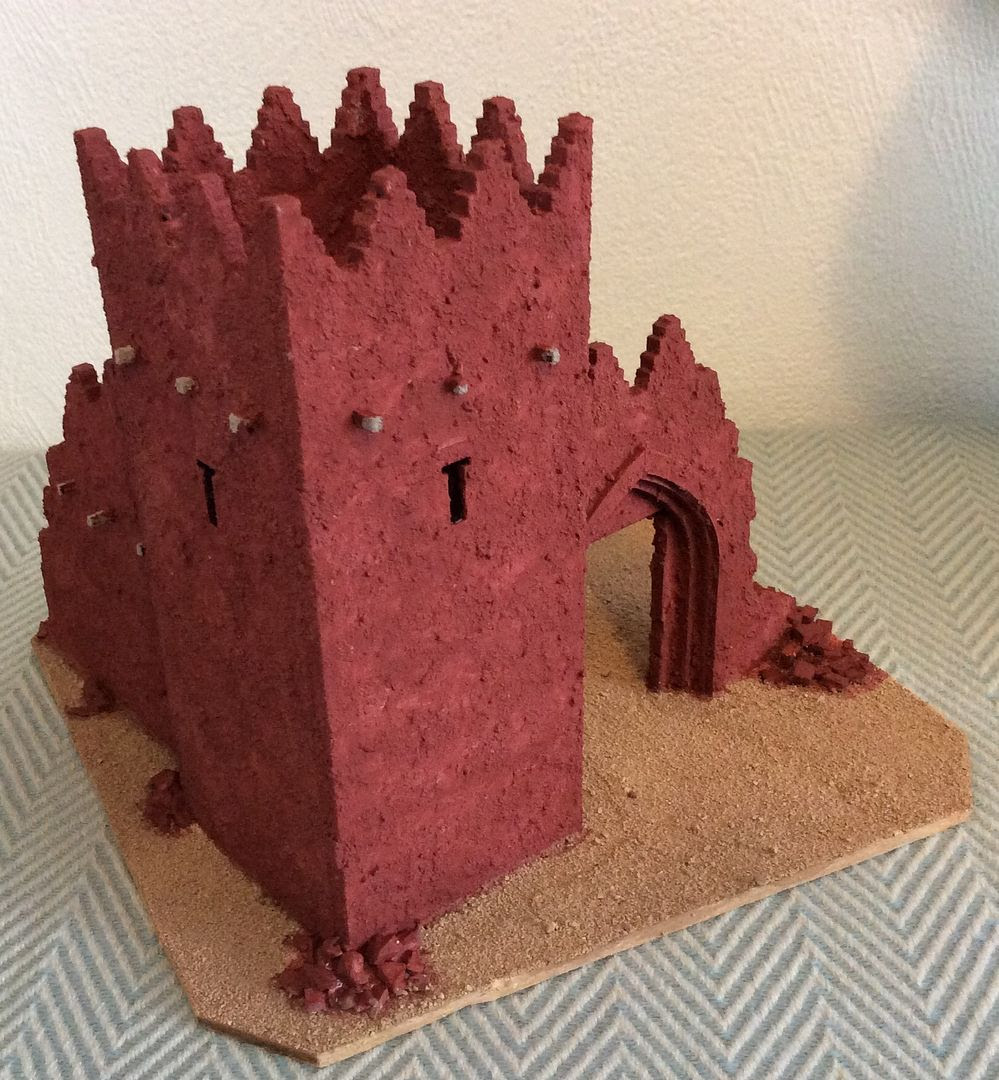 When the Base coat and the ground wash are dry I next dry brush heavily with Artiste Acrylic 'Burnt Sienna'. It's really necessary to dry brush this coat heavily to help the desired end effect ~ 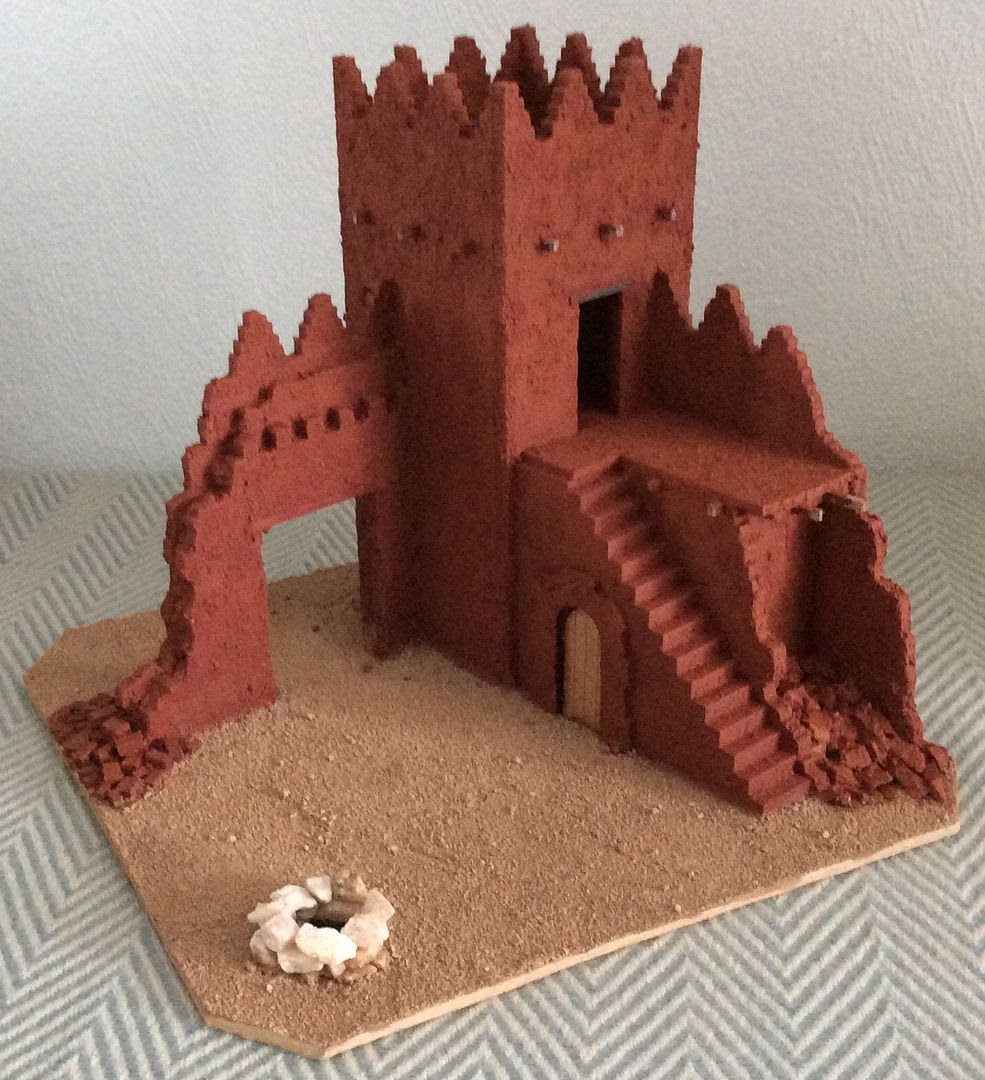 The second dry brushing needs to be much lighter handed and its best to do two light coats rather than one thickish one I've found. For this stage I used Artiste Acrylic 'Clay' and you get this rich orange brown look ~ 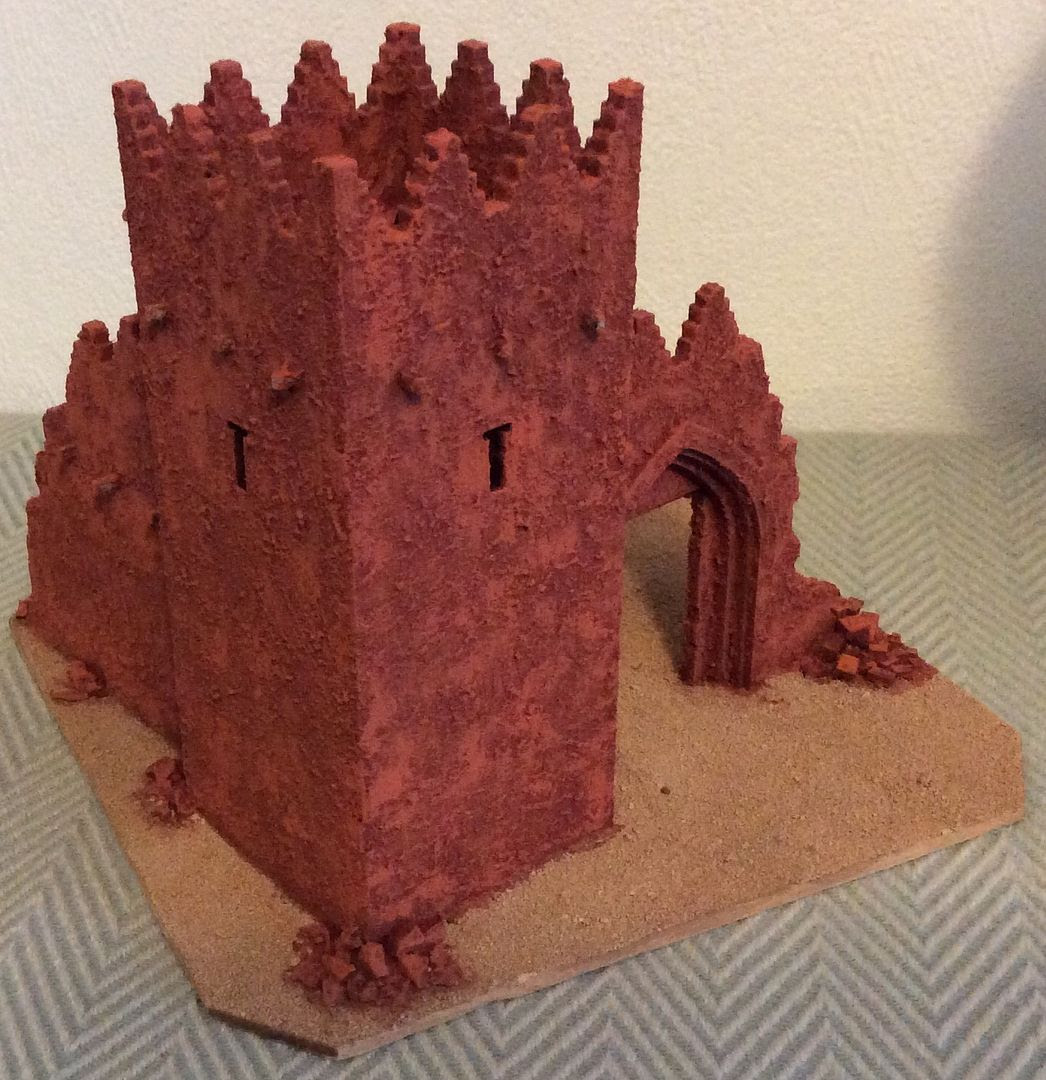 The final stage of dry brushing is the lightest you'll find. I use a dry brushing of Anita's Acrylic 'Cream'. The effect is to wash down the whole colour while highlighting the edges and texture. The effect produces this look on my Rhanzlistan buildings ~ 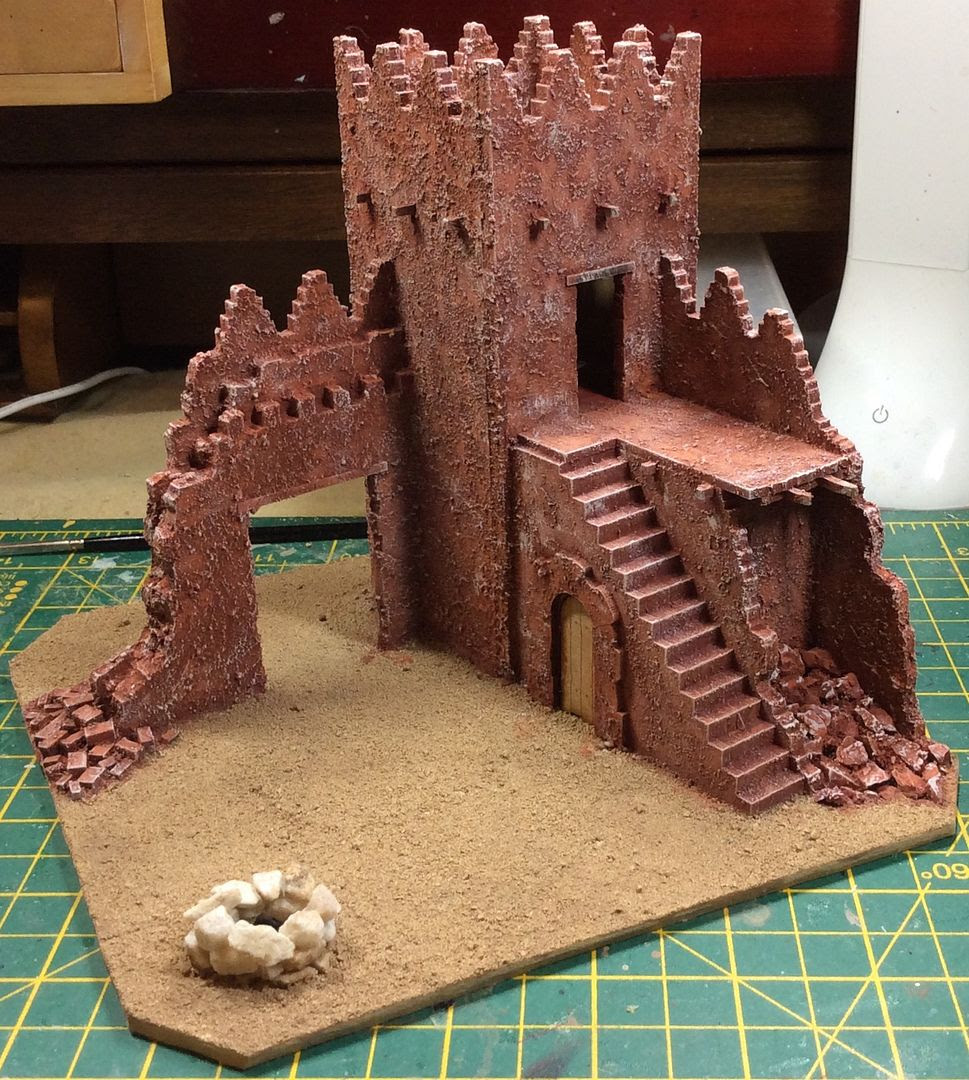 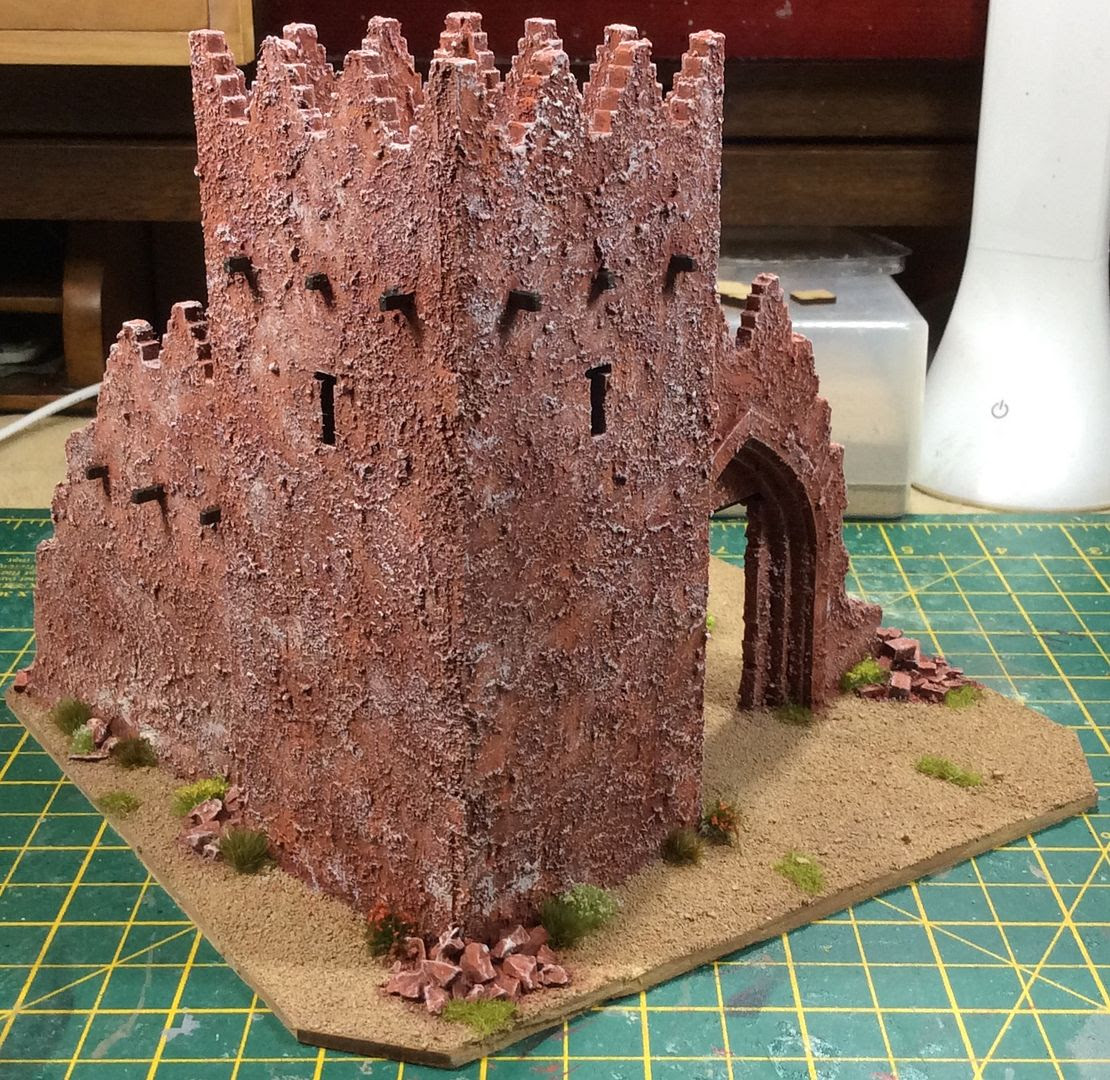 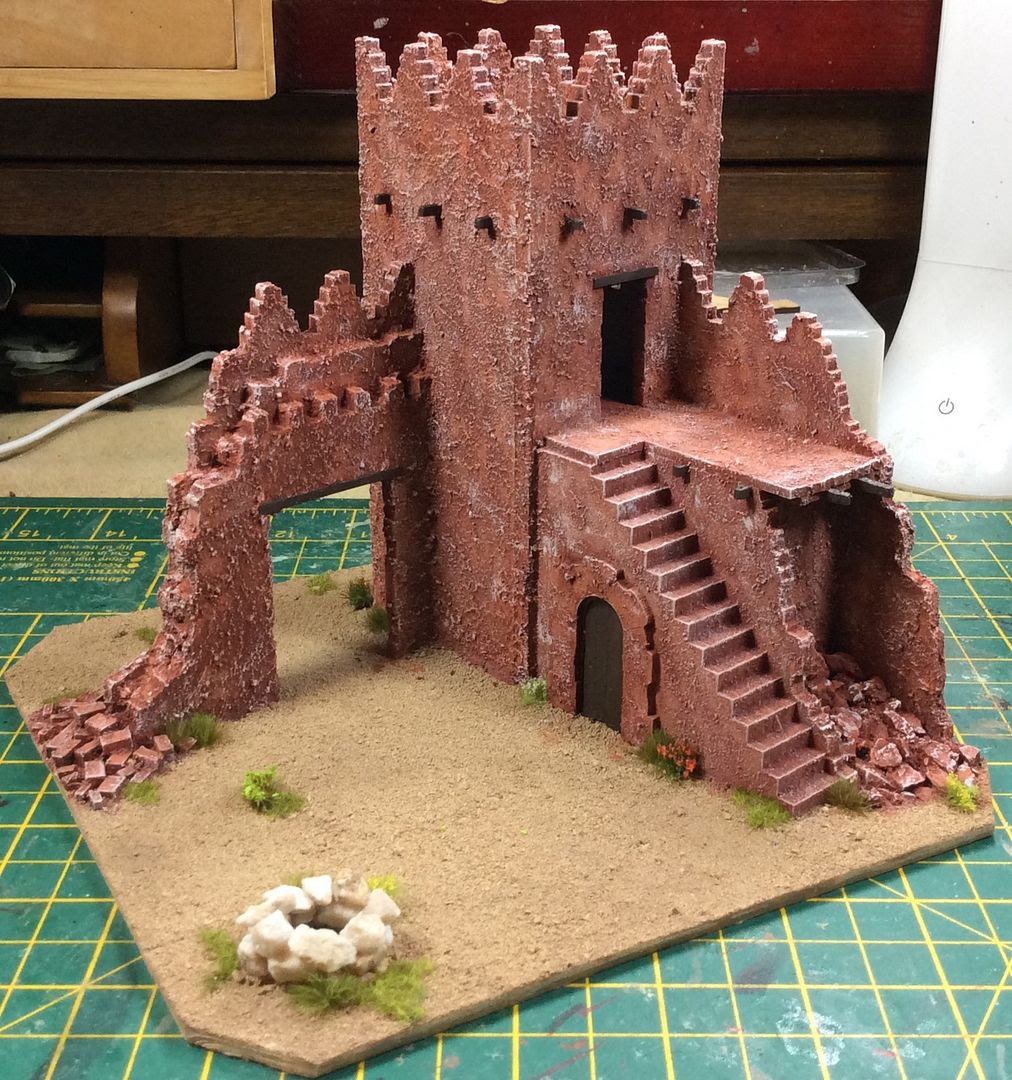 Well,it's pretty much finished now and should blend in well with my other buildings in next month's Rhanzlistan game here in GHQ.

David
I've collected, assembled, painted and played with toy soldiers for as long as I can remember and I've never seen any good reason to stop and I still can't! As a retired teacher I can devote as much or as little time to my family and then to my hobby as the fancy takes me from day to day. My modelling, painting and gaming are all pretty average if I'm honest, but they all bring me great pleasure, although nowhere near as much as my family and my friends in the hobby do!